What's On: coming up in England's Mid-West counties

Coming soon to a venue near you! Great live performances from some of our finest folk, acoustic and innovative artists in England's 'mid west'. We promote live music in Bath, Bristol, Cheltenham, Gloucestershire, Herefordshire, Leamington, Newbury, Oxfordshire, Stratford-upon-Avon, North Somerset, Swindon and Worcestershire - or thereabouts.  For tickets and more information of each gig, click on the orange website links. Looking for entertainment further afield? Then check out our nationwide music festivals listing page. 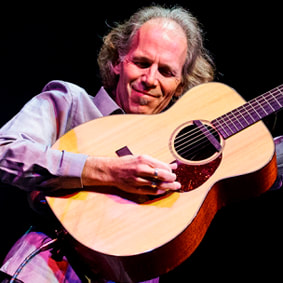 Supremely talented guitarist and songwriter Brooks Williams marks thirty years on the road in 2021, with a series of concerts on both sides of the Atlantic. He will also be touring extensively as the 'State of the Union' duo with Boo Hewerdine throughout the year.
​
For his 30th anniversary, Brooks has recorded an album of favorites from his back catalogue, re-imagined and re-recorded. Work My Claim shows off the full range of his voice, guitar styles and musical influences. The album features contributions by some of his closest musician friends including John McCusker (Mark Knopfler, McCusker-McGoldrick-Doyle, Heidi Talbot, Phil Cunningham-Ally Bain); Christine Collister (Richard Thompson, Daphne’s Flight); Jim Henry (Eliza Gilkyson, Tracy Grammer, The Boxcar Lillies); Aaron Catlow (Yola Carter, Sheelanagig, Hawes & Catlow), Ralf Grottian and Phil Richardson (Claypath).
​
For tickets and further information visit brookswilliams.com/concerts

Honoured with a Lifetime Achievement Award by the Ards International Guitar Festival in Northern Ireland (2017), Sarah McQuaid has also drawn critical praise for her voice and her engaging rapport with audience.

With the release of her most recent album, If We Dig Any Deeper It Could Get Dangerous, the Madrid-born, Chicago-raised, Cornwall-based singer/songwriter has expanded her battery of instruments to include piano, electric guitar and drum, and it’s drawn critical raves internationally.
Dutch music magazine Heaven hailed it as “an early contender for folk album of 2018,” the UK’s fRoots said it was “a collection to savour” and the USA’s PopMatters called it “a gateway into a true innovator’s soul," and FolkWords called it “A work of formidable passion.”

Dean Friedman first marked his entry into pop consciousness with the Top 20 chart success of his infectious hit single, Ariel, a quirkily irresistible and uncategorizable pop song about a free spirited, pot-smoking, vegetarian Jewish girl in a peasant blouse who lived, as the lyric goes, "...way on the other side of the Hudson".

Friedman scored again with the release of his follow up album, “Well, Well,” Said the Rocking Chair’, and the now classic hit single, Lucky Stars. This magical duet, performed with singer, Denise Marsa, zoomed to the top of the UK singles charts, going instantly gold. Lucky Stars paved the way for a slew of Friedman hits, including familiar radio staples such as Lydia, Rocking Chair, McDonald’s Girl and Woman of Mine.
Friedman’s consummate songwriting and performing, have earned him a loyal international following, devoted to the sophisticated, funny and profound work of a master songsmith. A five-time BBC Folk Award winner, his songs have been featured in a season finale of Grey’s Anatomy, he has appeared on-screen singing a specially composed song for Dr Who spin-off Class as aliens attack the earth, and he has presented documentaries on traditional music for BBC Radio 3.
His latest album The Outlander was recorded Sam Sweeney on violin, and Jim playing the 1949 Epiphone Triumph archtop guitar he bought just before the recording sessions.

Kathryn and musicians from Northumberland, Scotland and England invoke the dark, powerful, shamanic sounds of Ancient Northumbria and broadcast them to the modern world. Their inspiration comes from the wild, dramatic, weather-bitten countryside along Hadrian’s Wall, which seems so quintessentially Northumbrian…and yet, almost 2000 years ago that same landscape was inhabited by people from around the world, worshipping different gods and following different customs.Kathryn Tickell & The Darkening embrace that global perspective, bringing some of the oldest Northumbrian tunes and songs throbbing to life, intermingling them with new material and binding it all together with contemporary resonance and attitude.
Fresh sounds merge with ancient influences. Expansive sonic textures are created. Dazzling duets from Kathryn’s pipes and Amy’s accordion contrast with the dark and dirty riffs and rhythms of Kieran’s octave mandolin. Intrepid world-traveller Kate adds her fearless explorations and the inventive use of drums and percussion unites the ensemble.
​
For tickets and further information visit ​www.chippingnortontheatre.com

Phil is one of the most popular ambassadors for acoustic roots music. A dazzling instrumentalist, he is perhaps best known as a top flight fiddler and plays in the all-star line-up, Feast of Fiddles. But his skills don’t stop there, he also plays slide, Spanish and tenor guitar, mandocello, viola, mandolin and South American cuatro, not to mention contributing rich vocals.
He played his first gig at 14 and started working as a duo with Paul Downes in 1974 (their re-union Live at Nettlebed CD was released four years ago on the Talking Elephant label). He was then in the Arizona Smoke Revue and a key member of Johnny Coppin’s band. His impressive track record also includes touring with Mike Oldfield and being a member of the feted Albion Band from 1984-1991.
Show of Hands became a full-time partnership in the early 90s, a band that has gone on to sell out the Royal Albert Hall three times and who were voted Best Live Act, by the public, at the 2004 Folk Awards.
For tickets and more informaion visit www.showofhands.co.uk/phil-beer-tour-dates

Barrow-born Gerry Colvin has enjoyed a varied career in the music business - from his early days in the 1970's with a band called 'The Man Upstairs' (who toured with The Smiths) through the legendary John Peel favourite skiffle-cowpunk indie outfit 'Terry & Gerry' to his work in the early 1990's Gerry worked in Nashville as a professional songwriter and co-writing with Alison Moyet.
In 1993 Gerry formed the folk-pop band 'The Atlantics': they toured extensively including a slot at Glastonbury and in 1995 he co-founded the five piece folk band Colvinquarmby. They released six critically acclaimed albums and were voted best band at the prestigious Fairport Convention Cropredy Festival in 2009. In 2015 the original line-up of Terry and Gerry reformed and toured nationally with rock heroes Status Quo culminating with a concert at The Albert Hall!!
In 2013 Gerry released a self-penned solo album 'Jazz Tales of Country Folk' . His latest CD 'Six of One half a Dozen of the Other', a collection of ten(!) brand new songs, is available now.

​For tickets and further information www.gerrycolvin.co.uk

Steve Knightley is an English singer, songwriter and acoustic musician. Since 1992 he has been one half of possibly the UK's most successful Folk/Roots duos – 'Show of Hands'. His partner Phil Beer is widely regarded as one of the world's finest acoustic multi-instrumentalists, and Steve is himself one of the finest songwriters on the international circuit.

At the 2010 BBC Radio 2 Folk Awards Steve and Phil received a prestigious double accolade when they were named ‘Best Duo’ and also clinched the ‘Best Original Song’ award for Steve’s punchy ‘Arrogance Ignorance and Greed’ title track which has gone on to be one of the most acclaimed – and continually topical! – songs in the SoH repertoire.
​
"One of England’s greatest singer songwriters” - Mike Harding, BBC Radio 2
For full tour dates and further information www.showofhands.co.uk/steve-knightley-tour-dates

Eddi Reader is perhaps Scotland's greatest living female voice. In 2020, she celebrates her 40th year on stage with the ‘40 Years Live’ concert tour.From her earliest years playing the folk clubs of western Scotland and learning how to street sing across Europe (like her hero Edith Piaf) Eddi's path soon lead her to a professional career in music as a backing singer for Eurythmics and Gang of Four. Her band Fairground Attraction had huge international success and number one hits with ‘Perfect’ and debut album ‘First of a Million Kisses’ which stormed the charts in the mid 1980's. She has won Brit Awards, been awarded four honorary degrees, an MBE, sung to millions on some of the world's greatest concert and festival stages and collaborated with a host of stars across a myriad of genres including Folk, Jazz, Pop, World, Punk and even Classical work with various orchestras.
2020's ‘40 Years Live’ concerts promise to be something special, as with any Eddi Reader concert, the magic is being made in the moment, no two concerts ever the same. 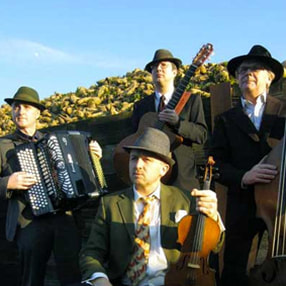 Hugely entertaining with immense skill and profound musicianship, The Budapest Café Orchestra have won acclaim from fans, fellow musicians and critics alike for their electrifying and entertaining shows.

​The Budapest Café Orchestra is a hybrid super acoustic band for the 21st Century, led by jazz violin superstar Christian Garrick, and playing traditional folk and gypsy-flavoured music from across the Balkans and Russia. Mournful Klezmer melodies, raucous Romanian Doinas and Hungarian Czadas are all encountered alongside beautiful ballads, such as the theme to Schindler's List and Andy Statman's haunting Flatbush Waltz. Evoking vivid images of Tzigane fiddle maestros, Budapest café life and gypsy campfires - plus a few surprises along the way - a show by the BCO will make you want to book that holiday down the Danube.
For tickets and full tour dates visit www.budapestcafeorchestra.co.uk

Edgelarks (Phillip Henry and Hannah Martin) embark on another tour of the unusual and adventurous. Combining exquisite folk with influences as diverse as blues, Indian classical, and beatboxing, the BBC Folk Award winners are taking their show to some equally special places. The pair take their strong roots sound, mixing original song-writing with stomping beatbox harmonica, soaring fiddle and vocal harmonies, running wilder with each repeat play.

A busy collaborative period has included work as part of the Gigspanner Big Band (featuring members of Bellowhead and Steeleye Span); and performing at BBC Radio Two’s Festival In A Day to a Hyde Park crowd of 50,000 – supporting Kylie Minogue!

​They are now leaving the beaten track firmly behind them, and would love you to join them for this celebration of hidden gems, extraordinary venues, and uncommon concerts.

Tickets and further information from www.rosestheatre.org/events

Martyn Joseph is a performer like no other: Shades of Springsteen, John Mayer, Bruce Cockburn and Dave Matthews there may be - but he stands in his own right, built on a reputation for giving what thousands have described as the best live music experience of their lives delivering his "songs of lyrical intelligence" according to BBC Radio 2's Bob Harris. In addition to his five top 50 UK hits, the importance of his work has been recognised by programmes such as BBC Radio 2’s prime time series on Singer/Songwriters. Social justice has an essential presence throughout his music, which has been recognised with various humanitarian awards and plaudits.

There is a versatility to Martyn’s music that is hard to categorise. Many have tried, resulting in labels such as Folk, Rock, Soul, Folk Funk and Americana; all of which somehow miss the mark. But sometimes music doesn’t need a defining genre and with the ability to articulate a sense of the bigger picture, Martyn’s music and social commentary manage to empower and speak for many.

After live sessions with BBC Radio 2 and 6 Music, Glastonbury Festival appearances and BBC Introducing’s backing they released The Gap in 2020 with FRUK declaring them “one of the truly pioneering acts in folk music”

India Electric Company were one of the first acts to play at Downend Folk Club, and make a welcome return to one of the most popular music venues in the area.