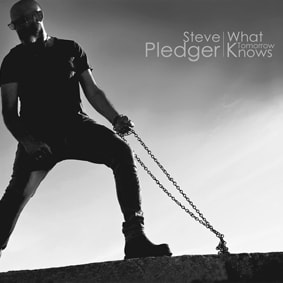 Six years after releasing the award-winning studio album, ‘Somewhere Between’, and three years since his critically acclaimed live album, ‘Alone In The Dark’, Steve Pledger is back, set to deliver his brand new studio album to be officially released on 28th November.

Steve’s fourth collection of original material, What Tomorrow Knows was launched on 8th October 2022 at a special show at Durham Town Hall. It includes songs which have already become firm favourites in recent years at shows, alongside others now being heard for the first time.

Produced with the much-in-demand Lukas Drinkwater at the helm, the album is graced by Lukas himself along with other gifted collaborators Aaron Catlow (strings); Nigel Neil (organ), and John Heslop (sax/clarinet). Each brings something special to what is perhaps Steve’s strongest set of songs to date.
Steve says the following of his latest project:

“Whilst I don’t set out to write twelve songs with any kind of overarching theme, one often becomes
apparent as a record takes shape. ‘Somewhere Between’ dealt a lot with transition, and it’s clear to me that these new songs speak a great deal to consequences. Consequences of our action, and inaction; our beliefs; our attitude toward and treatment of others, as well as ourselves.

"More than any work I’ve produced to date, it feels as if the writing, production, arrangements, and my own performances have come together to create something that best represents what I want to say and how I wish it to be heard. This record pulls no punches where punches ought not to be pulled, but I believe there is also an empathy and depth of compassion to it that I strive to capture in everything I do, on record and on stage.

"With the help of everyone involved in this project, that’s what I believe we’ve managed to achieve. And I could not be more excited to share it with anyone who wishes to hear it.”

Available to pre-order now at www.stevepledger.co.uk, What Tomorrow Knows is released on 28th November in both CD and digital format, as well as on streaming platforms. For regular updates, people can follow Steve on Facebook & Instagram (StevePledgerMusic); Twitter (SteveMPledger), and sign up to his mailing list at www.stevepledger.co.uk. There is also his Patreon page (Steve Pledger) containing exclusive material, offers and more for subscribers.

Voices from the Cones is a glass act 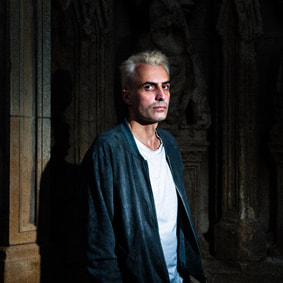 From the huge Glassworks production line and cone-shaped furnaces of the past to the reflections on bespoke pieces created in more recent times, Dan Whitehouse's new work Voices from the Cones celebrates the largely untold stories of Stourbridge's master craftsmen/craftswomen and their communities.

For over 400 years, the glassmaking industry nourished the communities of Stourbridge in the West Midlands, UK, where - thanks to the skills of immigrant French Huguenots - it became the most important glassmaking area of the country. In recent years the industry has faded away with the last factory apprentice, Malcolm Andrews, now teaching artisan makers, who are the last link in this glassmaking chain.

​In 2019 Dan Whitehouse was invited by Alan Ellsmore of the Ruskin Mills Trust in Stourbridge (a college built on the old Glassworks site) to research and write a narrated song cycle about the history and community of the Glassworks which closed down in the 1990s. The project was supported by National Heritage Lottery funding sourced by a Ruskin Mill Trust/Dudley MBC joint bid.

Voices From The Cones sprang from an archive of interviews with 100 former glass workers talking about their memories of working in the glass trade, alongside new interviews conducted by Dan accompanied by storyteller John Edgar. The result is an emotive journey into the history and future of the glass industry. The original live show, performed by Dan and augmented by John Edgar’s incredible storytelling and narration, was featured at the International Festival of Glass in 2019 and will be again on August 24th 2022 (coincidentally, the United Nations International Year of Glass) as well as at the Yorkshire Festival of Storytelling 2021.

Now, thanks to Arts Council England funding, each song and the ‘radio ballad’ style song cycle with narration will feature on this two disc album, released on 30th September 2022. It may be half a year away but already there’s an eclectic mix of artists from all over the World heading for Gate To Southwell Festival 2023.

Among the headline acts already confirmed there’s The Dog Show Sessions – an unmissable collaboration between British folk music legends Show Of Hands and the Madrid-based Irish-American roots quartet Track Dogs.  Both acts have played Southwell before but together they’re sure to become a folk roots supergroup.

As usual there’ll be plenty of great singer-songwriters will be performing at Gate To Southwell including John Smith, who missed the 2022 festival due to Covid but whose ‘Far Too Good’ has been streamed nearly 50 million times on Spotify, and the Californian troubadour Tom Russell who’s been compared to Leonard Cohen, Bob Dylan and Hank Williams or described as “Jack Kerouac meets Johnny Cash” (Americana UK).

Tier One discounted tickets are now on sale for gtsf.uk, which will again take place at the beautiful lakeside setting in Kirklington (NG22 8NX). The festival received great reviews last year including RnR Magazine’s verdict: "excellent cast list...too many good performances to mention. It has become a great favourite and if you haven't been already, try it." 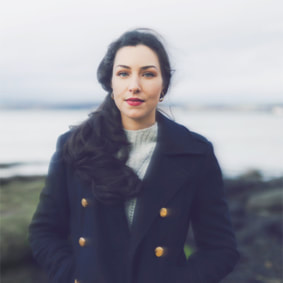 Chloe Matharu is a singer-songwriter and Celtic Harpist in Wemyss Bay, Inverclyde, who is set to release her debut album 'Small Voyages' this September.

"Many of Chloe's songs draw on her experience as a Navigational Officer in the Merchant Navy, sailing around the world on oil tankers. As a result, her thoughtful and sensitive songwriting offers an insight into the modern seafarer's life. Chloe's voice, coupled with her harp playing, form a haunting combination perfectly suited to the reflective nature of her material.

When speaking about the inspiration behind the single, Chloe explains, "The River Clyde is a backdrop to our lives in Inverclyde. During lockdown it was really special living so close to the water and being fortunate enough to walk along the coastal routes for daily exercise. I teamed up with Brian from the MacDonald Brothers in Ayr, who added additional instrumentation on this track and also produced the album. I used to visit the Isles of Cumbrae, Arran and Bute on holidays as a child living in Edinburgh, and now living on the West Coast of Scotland, I can see those beautiful islands from my window. There were also sediment islands that used to be used by fishing vessels in the Clyde that have long since washed away. Reading about these, the phrase "forgotten islands" stuck in my head, and a song was born”.

Chloe's talent affords a refreshing outlook on this new tradition of maritime Folk music. Her lyrics and melodies will resonate with you long after her performance. Of Scottish, Welsh and Punjabi heritage, Chloe sings in English and Welsh. With sell-out shows at the Edinburgh Fringe in 2021, Chloe has enjoyed playing venues such as Glad Cafe Glasgow, Green Note in London, Beacon Arts Centre Inverclyde, McIntosh Club, Helensburgh and Cwtch Cafe in Pembrokeshire, to name a few. She also frequently performs corporate events and recently played a series of gigs for COP26 to high-profile clientele. Chloe has a busy year ahead with live dates including Edinburgh Fringe, Unearthed Festival, Fishguard Folk Festival, Fringe by the Sea, as well as UK tour dates. Chloe has  been shortlisted for the 2022 English Folk Expo and enjoyed performing at this year’s Celtic Connections 2022. 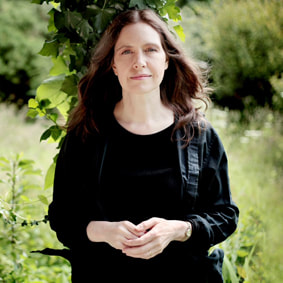 With her new live-in-lockdown album The St Buryan Sessions drawing critical raves and appearing on best-of-2021 lists on three continents, Sarah McQuaid is once again hitting the road.
​
The tour coincides with the release of a new video filmed earlier this month at the behest of The Bert Jansch Foundation, as part of their “Around The World In 80 Plays” project.

In what would have been the legendary guitarist and singer-songwriter’s 75th year, the Foundation set three Yamaha LL TransAcoustic guitars travelling around the globe from guitarist to guitarist, each playing a song or tune inspired by Bert.

“I was tremendously honoured to be invited to take part,” says Sarah. “It was incredible just to handle an instrument that’s been played by so many guitarists I’ve worshipped from afar for so long, and to see their signatures on it and sign my own name under theirs. It was almost surreal.”

To make the video, Sarah returned to the beautiful medieval church of St Buryan, not far from her home in rural West Cornwall, where The St Buryan Sessions was also recorded and filmed.

Sarah’s own custom-made Andy Manson acoustic guitar will be accompanying her on tour, along with her Korg SV-2 stage piano, vintage Premier Olympic floor tom drum, and  the Ibanez Artist electric guitar originally loaned to her by another guitar legend, the late Michael Chapman, when he produced her 2018 album If We Dig Any Deeper It Could Get Dangerous.

Released on CD and limited-edition double vinyl LP on 15 October 2021, The St Buryan Sessions made it onto “Best of 2021” lists published by such far-flung media outlets as 2ser 107.3fm in Sydney, Australia; the “Ear To The Ground” radio show on Nashville’s WXNA FM; the Netherlands’ “Slim Chance” music blog; and the UK’s “Strummers & Dreamers” show on Cambridge 105 and Blues & Roots Radio. 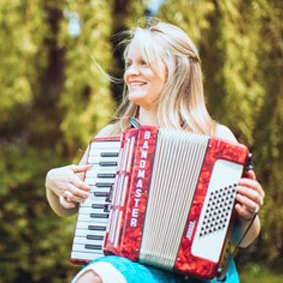 Katie Grace Harris is a rising folk star based in Oxfordshire, who's style has been described as 'earthy, honest, folk.' A talented vocalist, pianist and accordion player, Katie puts her own twist on traditional material, as well as composing and performing her own well-crafter material in the folk tradition.

Katie’s Debut album ‘The Toledo Sessions’ was released in the late summer of 2022. It includes two songs developed in collaboration with Reg Meuross and features musical contributions from Phil Beer, Odette Michell and Lukas Drinkwater

Katie’s first “instrument” is her distinctive pure voice - she uses it to draw her audiences into the story she is telling with ‘spine-tingling’ results. Her engaging live performances usually feature her playing a range of instruments including Piano, Piano Accordion and Shruti and she can often be seen toting a home-made chess board stomp box and a pair of sturdy boots for a full one-woman-band experience!

The last three years have proved a turning point in Katie’s career. As live gigs moved online, Katie took the opportunity to bring her music to audiences around the UK and has built on this as live performances have re-emerged supporting artists such as Katherine Priddy, Hannah James and Toby Kuhn and Jim Causley as well as headlining at various Folk Clubs and festivals. Her talent for writing original material attracted the attention Reg Meuross, festival favourite and one of the UK’s Folk singer/songwriter lynchpins. This resulted in a collaborative song-writing and recording project which features as part of Katie’s debut album ‘The Toledo Sessions’.​

For more information, tour dates and news of the album release, visit https://www.katiegraceharris.com/